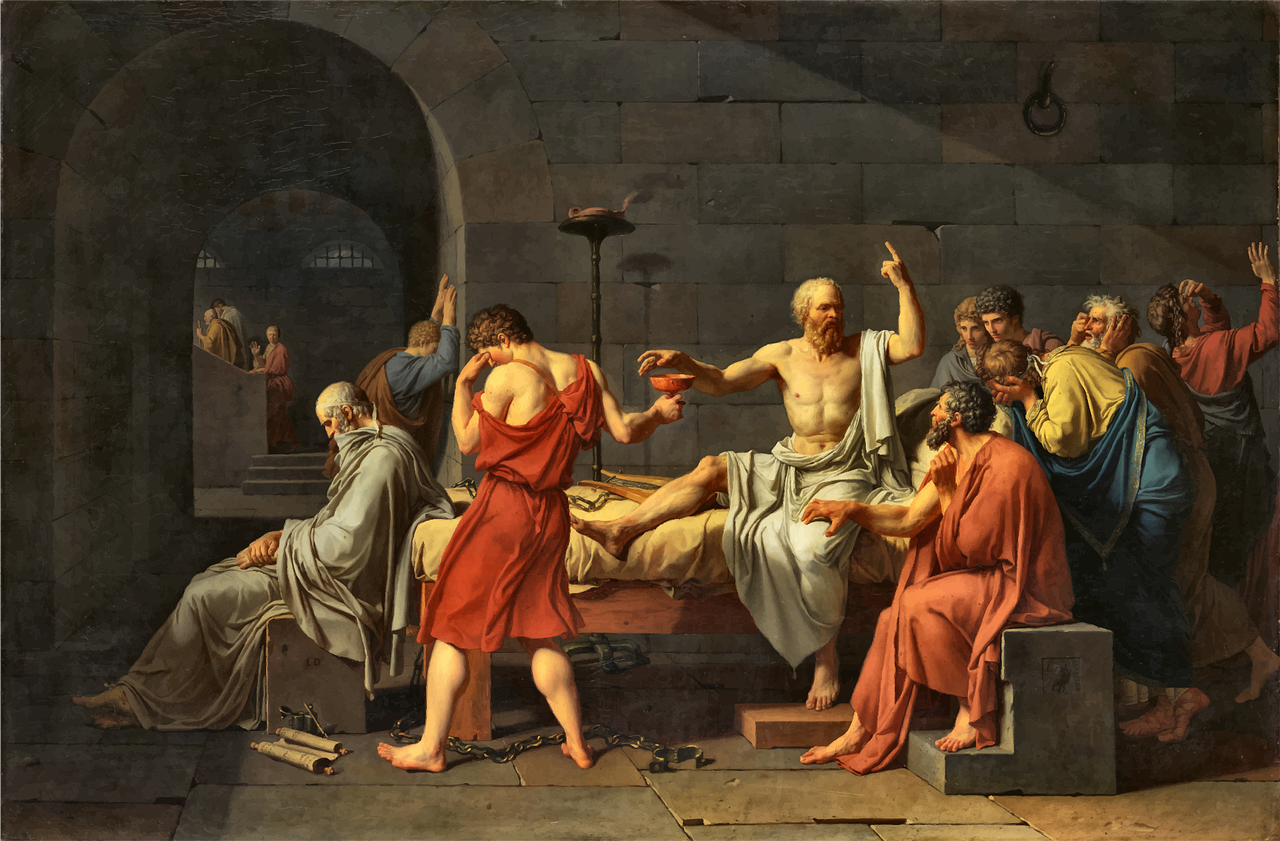 Subsequent to our contemplation of the Sophist, where we primarily reflected on Being and Not Being, we now move to the last dialogue in the trilogy, being the Statesman. The characters in this dialogue are the Stranger from Elea, Socrates, young Socrates and Theodorus. What these gentlemen now seek to discover is the man who is a Statesman. It is worth recalling that Socrates uses a process called dialectic, which is a series of questions and answers with the ultimate aim being the discovery of the Truth. For this system to work, both the questioner and the person answering need to be committed to discovering the Truth and being willing to being refuted. It is a systematic process that eliminates all probabilities and ultimately leaves one with the Truth only. We also need to be mindful that the Truth cannot change and is thus absolute leaving no room for your truth (or opinion) or my truth, there can only be one Truth.

Theoetetus said in the first dialogue of this trilogy: For would not the investigation of one another’s fancies and opinions, and the attempt to refute them, when each man insists that his own are right, be a tedious and blatant folly. The Platonic dialogues are infused with a concept usually referred to as the Theory of Forms or the theory of ideas, with the forms and ideas representing unchanging and eternal causes that lie at the source of all physical manifestation. This becomes clear when studying these Platonic dialogues where there is a constant pointing to these absolutes, like absolute beauty, courage and justice and of course absolute Truth waiting in the background waiting to be discovered. Dialectic is a long process, and we need to be patient and precise and if the dialogue remains true to these eternal principles, the Truth will arise.

We may question why Socrates is so painstaking in his search for a person to head up and lead a State. This may be answered by looking at leaders past and present with very few possessing qualities like honesty, perseverance, temperance and justice and of greater concern, a person who can withstand the temptations that would beset them when placed in a position of trust and influence and remain incorruptible. Referring back to his seminal work, the Republic, those who would be elevated to leading a State would be subjected to a long process of education from their youth to prepare them for such a role. It follows that the same would be true in the governance of an individual. And this is something that receives scant attention in this day and age where we see totally unprepared individuals being placed into positions of great trust and power. So this is indeed a very important consideration worthy of any seeker after Truth.

We will now begin our investigation of the Statesman:

Str: Anyway, after the sophist it is necessary, in my view, that the two of us seek out the man who is a statesman; so tell me whether we should place him in the rank of those who are knowledgeable, or not?

Str: So where may one discover the statesman-like path? For it is necessary to discover it and, having set it apart from the others, to impose one character upon it, and by assigning one distinctive form to the other branches, make this soul of ours regard all knowledge as being of two kinds. Now, aren’t arithmetic, and certain other skills akin to it, devoid of activity, as they simply provide knowing?

Y Soc: This is the case.

Str: However, those concerned with carpentry and all sorts of manual labour have acquired their knowledge as though naturally inherent in the actions, and they use it to bring to completion the objects they generate, objects that did not previously exist.

Str: Well, all knowledge may be subdivided in this way, by designating one part as involving action and the other as only cognitive.

Y Soc: I grant that these two kinds belong to a single whole; knowledge.

Str: Now shall we designate the statesman, the king, the master, and even the estate manager, as one, when we are referring to them all, or should we declare that the skills are just as many as the names that are spoken; but it is better for you to follow my lead here.

Str: If someone is competent to advise one of our public physicians, he himself being a private citizen, wouldn’t it be necessary to refer to him by the name of the same skill as the person he is advising?

Str: What about this? Shouldn’t we say that a person who is a skilled adviser to a man who is exercising kingship over a country, being himself a private citizen, possesses the knowledge that the ruler himself should have acquired?

Y Soc: We should say so.

Str: But, of course, the skill of a true king is kingship.

Str: And won’t someone who has acquired this skill, whether he happens to be a ruler or a private citizen, be correctly referred to as kingly, in any case, on the basis of the skill itself?

Str: And indeed, estate manager and a master are the same.

Str: What about this? Surely there isn’t any difference between an impressively large household and a substantial but a small city, when it comes to rulership.

Str: And so, on the matter we were considering, it is evident that one knowledge applies to them all; and whether someone designates it as kingship or statesmanship or estate management, we should not argue with him.

Str: But this much is obvious, anyway, that in order to hold power, any king is able to do very little by means of his hands or his body, as a whole, in comparison with the intelligence and force of his soul.

Str: Well, do you want us to assert that a king has more affinity with purely cognitive knowledge, rather than with knowledge that involves manual skill, and is, on the whole, active?

Str: In that case, shall we place all these together into the same category, as one; statesmanship and the statesman, kingship and the kingly person?

This I believe is sufficient to set the scene of the dialogue to come and hopefully we will come to understand the qualities necessary for a King (Statesman) to rule and administer his State. I thus look forward to embarking on this process of discovery with you in the weeks to come.

“I go to the Philosophy School because it has helped me think about things I had not given much thought to before. It has helped me to think in a different way and to find new perspective on life, to focus on working out what is important, and to rediscover some of the joy in life which was there all the time. And it is great to do this with a fun bunch of people who are also searching and thinking and wanting to understand. It can lead you to a new dimension in your faith. It gives you time t… END_OF_DOCUMENT_TOKEN_TO_BE_REPLACED

“I go to the Philosophy School because it has helped me think about things I had not given much thought to before. It has helped me to think in a different way and to find new perspective on life, to focus on working out what is important, and to rediscover some of the joy in life which was there all the time. And it is great to do this with a fun bunch of people who are also searching and thinking and wanting to understand. It can lead you to a new dimension in your faith. It gives you time t… END_OF_DOCUMENT_TOKEN_TO_BE_REPLACED

“Studying philosophy has kept life fresh and interesting. I am able to be objective and less limited by past conditioning. It has given me courage to feel deeply without being afraid of becoming lost. I have an inner steadiness and calm which endures through any storm. I have learnt the freedom of complete honesty and the value of good company. I am never alone.” “Studying Practical Philosophy has not only brought depth, understanding and meaning to my life, but showed me how to experie… END_OF_DOCUMENT_TOKEN_TO_BE_REPLACED

Over the past few years I have been part of the School of Philosophy and one of the great lessons has been looking at oneself rather than others. It says a lot about us when we judge another. I didn’t think I was judgemental person (maybe not outwardly or obviously) but as I learned what it is to truly love and accept other people I realised that there was plenty for me to work on. We are all living life through our own layers and conditioning. We cannot see other people’s layers so lets not be … END_OF_DOCUMENT_TOKEN_TO_BE_REPLACED

I was in search of an authentic institution for Meditation for some time and found exactly what I had been looking for when I joined the School of Philosophy.  I instantly felt that I am in the right place.  The Teachings and the Facilitators are excellent.  The result – positive changes in my life. I am inspired and attending Class is something that I look forward to week after week.  I’ve met the most dignified and refined people. A Teaching I use daily which I learnt from the Sc… END_OF_DOCUMENT_TOKEN_TO_BE_REPLACED

I joined the school in October 2015. At the time I was a short-tempered young man and very bitter. My life was a mess, nothing I tried seem to work. And then classes began. In the beginning it was odd for me, it sounded so mystical and I never thought I’ll get the hang of it. For some time I would miss my practices at home, and be sustained by the group session. But then some shifts began to emerge in my life, I became more peaceful and could accept others as they are. Then I could accep… END_OF_DOCUMENT_TOKEN_TO_BE_REPLACED