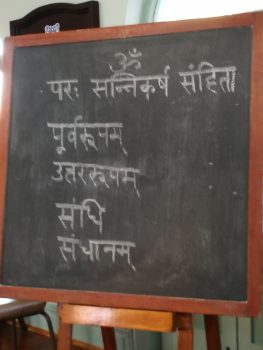 Sanskrit is the classical language of Indian and the liturgical language of Hinduism, Buddhism, and Jainism. It is also one of the 22 official languages of India. The name Sanskrit means “refined”, “consecrated” and “sanctified”.

Sanskrit is a standardized dialect of Old Indo-Aryan, originating as Vedic Sanskrit as early as 1700-1200 BCE.

The most ancient documents are the Vedas, composed in what is called Vedic Sanskrit. Although Vedic documents represent the dialects then found in the northern midlands of the Indian subcontinent and areas immediately east thereof, the very earliest texts—including the Rigveda (“The Veda Composed in Verses”), which scholars generally ascribe to approximately 1500 bce—stem from the northwestern part of the subcontinent, the area of the ancient seven rivers (sapta sindhavaḥ).

One of the oldest Indo-European languages for which substantial documentation exists, Sanskrit is believed to have been the general language of the greater Indian Subcontinent in ancient times.

Sanskrit, has developed along with Vedic culture. The earliest example of Sanskrit is heard in the second millennium and it was only an oral language for constructing and reciting hymns and poems with no written form till 600-700 AD.

Over its long history, Sanskrit has been written both in Devanāgarī script and in various regional scripts, such as Śāradā from the north (Kashmir), Bāṅglā (Bengali) in the east, Gujarātī in the west, and various southern scripts, including the Grantha alphabet, which was especially devised for Sanskrit texts. Sanskrit texts continue to be published in regional scripts, although in fairly recent times Devanāgarī has become more generally used.

We welcome students to take up the study of Sanskrit as part of their philosophical studies within the School.

You will gain insights into sound, word and meaning, and among many benefits you will find that your own language will be better utilised and understood.

Why do Students at the School of Philosophy learn Sanskrit?
All modern languages of the world are natural, for they follow the nature of Man in this age, not the real nature, but the corrupt or mixed up nature, devoid of purity and strength. Conversations 1973:7.2

The Sanskrit language is there, pure and clean, unhampered or distorted by anyone; and it can mirror the laws of the universe to anyone. This is the good companion, the good guide and the great friend. Journey with it and then Veda is simple and sure. Conversations 1974:7.4

What are some benefits (three) of learning Sanskrit?
Understand in depth the wisdom contained in the Vedas – Upanishads, Bhagavad Gita, etc. Understand spiritual concepts which are not capable of accurate expression in English. Sanskrit is refined and truly natural, for it contains original laws and original sounds and their combinations. Only through the proper study of this language could Truth emerge. Conversations 1971:4.1

1 thought on “Students at the Durban School Enjoy Learning Sanskrit”

I was in search of an authentic institution for Meditation for some time and found exactly what I had been looking for when I joined the School of Philosophy.  I instantly felt that I am in the right place.  The Teachings and the Facilitators are excellent.  The result – positive changes in my life. I am inspired and attending Class is something that I look forward to week after week.  I’ve met the most dignified and refined people. A Teaching I use daily which I learnt from the Sc… END_OF_DOCUMENT_TOKEN_TO_BE_REPLACED

I joined the school in October 2015. At the time I was a short-tempered young man and very bitter. My life was a mess, nothing I tried seem to work. And then classes began. In the beginning it was odd for me, it sounded so mystical and I never thought I’ll get the hang of it. For some time I would miss my practices at home, and be sustained by the group session. But then some shifts began to emerge in my life, I became more peaceful and could accept others as they are. Then I could accep… END_OF_DOCUMENT_TOKEN_TO_BE_REPLACED

“Studying philosophy has kept life fresh and interesting. I am able to be objective and less limited by past conditioning. It has given me courage to feel deeply without being afraid of becoming lost. I have an inner steadiness and calm which endures through any storm. I have learnt the freedom of complete honesty and the value of good company. I am never alone.” “Studying Practical Philosophy has not only brought depth, understanding and meaning to my life, but showed me how to experie… END_OF_DOCUMENT_TOKEN_TO_BE_REPLACED

“I go to the Philosophy School because it has helped me think about things I had not given much thought to before. It has helped me to think in a different way and to find new perspective on life, to focus on working out what is important, and to rediscover some of the joy in life which was there all the time. And it is great to do this with a fun bunch of people who are also searching and thinking and wanting to understand. It can lead you to a new dimension in your faith. It gives you time t… END_OF_DOCUMENT_TOKEN_TO_BE_REPLACED

Over the past few years I have been part of the School of Philosophy and one of the great lessons has been looking at oneself rather than others. It says a lot about us when we judge another. I didn’t think I was judgemental person (maybe not outwardly or obviously) but as I learned what it is to truly love and accept other people I realised that there was plenty for me to work on. We are all living life through our own layers and conditioning. We cannot see other people’s layers so lets not be … END_OF_DOCUMENT_TOKEN_TO_BE_REPLACED