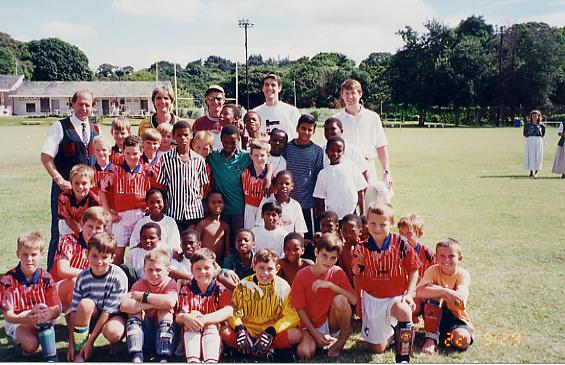 One Saturday morning he asked if I would stand down so that Anisha Ramlaul, ‘a philosopher from birth’ and representing all things bright and beautiful, could begin her training as the future Headmistress of St James School for Boys and Girls. I happily agreed. 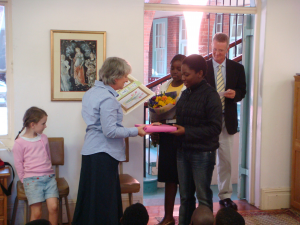 Around the same time Mr Gordon Adams who had been taking a Philosophy group in Umlazi, invited his students to the Durban schoolhouse at 200 Montpelier Road. The venue which they usually used was unavailable that morning. One of these young men took a great deal of interest in the Saturday School children and asked if he could bring some children? They would be most welcome, was the reply. That young man sprang into action and two weeks later ninety (that would be 90) children arrived (not necessarily in the right age group) from Umlazi, in cars and taxis.  It was not exactly a quiet arrival. The neighbours were unimpressed.

Hastily brought in tutors couldn’t cope – even though they had raised large families themselves. A few of the children had been well cared for, but most were unkempt and undisciplined

I was asked to return.

THIS WAS THE TURNING POINT IN OUR LIVES. AND THAT OF THESE CHILDREN.

These were indeed difficult and challenging times. The work additionally revolved around educating these children in life skills.

I had been asked to take a group of boys between 5 and 7 years of age. During the course of the week one word kept arising in the mind. GIVE. My response was uncharitable to say the least. I found myself however purchasing plastic files and pencil cases (filling them to capacity) and preparing worksheets – with the boys names on everything. I set the room up the following Saturday in a meaningful and orderly way, and with flowers.

I asked the children to line up and enter the room quietly.  They tried their best. I then took each boy in turn to his appointed chair. They were not allowed to touch one thing until we had taken a moment to come to stillness.

The room fell quiet. I shall never forget that moment. They unpacked and repacked their pencil cases. They opened and closed the files.  Their faces shone. Moreover, each week another idea would arise – bake a cake and let them cut their own slice, with a beautiful silver cake knife. With attention!  Take individual photographs seated with straight backs, heads held high, on a beautiful antique chair – they took these home the following week; My mother made marble bags and added marbles….and a batch of cup-cakes with everything imaginable to decorate them. They were most colourful!  It took a while to clean up.

New ideas kept arising – extending their boundaries and focusing  their attention. At the end of the year I took this group to see Musgrave Centre in all its Christmas glory. Most of these dear children had never been in a lift before, definitely not a glass one. So up and down we went. Their nervousness waned. They had never been on an escalator before, what an experience.

I have to say this was an unusual sight! The boys had been told not to touch anything – they didn’t. Saturday School began to transform rapidly. Falling still at the beginning and end of every activity became natural. Including soccer! How lucky were we to have help in this regard from George Koumantarakis.

All the tutors were generous in many different ways, and gave unstintingly of their time. We learnt from the children. The children learnt from us. We faced many difficult and different situations together. Anisha remained steadfast at the helm – giving, guiding, guarding.

In the meantime, Mr Moore and senior students had galvanised themselves into action – a house in Isipingo, near Umlazi, was being spruced up to accommodate our increased numbers. Everyone worked with a great deal of humour and a full heart – over most weekends! It was a big job which had to be finished in a short space of time.

Once completed Saturday School moved to Isipingo. We bought a bus from another school…so that the children could attend every week. Most families could not afford transport every week. Our bus driver was the present Principal of the School of Philosophy in Durban. A team of ladies manned the kitchen – gone were the days of serving fruit juice and biscuits! We added sandwiches, nuts and apples. It goes without saying that from the beginning there was a language barrier. But we overcame this by teaching the children art, geometry, sewing, carpentry, singing in English and sounding Sanskrit prayers. All this could be achieved by speaking slowly, getting the children to repeat the direction, and demonstration.

The last group I took at Saturday School was a girls group – aged 13 – 16. They were delightful. One morning we set two separate tables – one was from items gathered from my friend Margaret Stretton’s home – an exquisite table cloth, silverware, crystal, and Royal Dalton. The other was set with grass place mats, cutlery with wooden handles, we hunted for grasses and twigs from the surrounding verges as floral decor, used enamel plates and mugs, and finished off with paper serviettes with a bold strelitzia design.

We compared the two. Both were beautiful. It was the care and attention to detail which made them so. At our Christmas function, they sang a song which Christina our resident music teacher had taught them – with such purity, even the parents…far more boisterous than the children…became quiet. I cried. I wasn’t the only one! Another group recited Shakespeare.  Another recited a Sanskrit prayer. Some of the young girls did an Abhinaya dance [1]– their long skirts in assorted bright colours were glorious. Another group sang the National Anthem – and invited guests to join in. It raised the roof!

After several years we needed to sell the Isipingo property, as well as 200 Montpelier Road in Morningside, to help pay for a building in Stamford Hill Road. Saturday School did continue for a while…and not unsuccessfully. But all our financial resources were now invested into this new adventure – a venture called St James School for Boys and Girls.

[1] Abhinaya is the art of expression in Indian aesthetics. More accurately it means “leading an audience towards” the experience of a sentiment.

I joined the school in October 2015. At the time I was a short-tempered young man and very bitter. My life was a mess, nothing I tried seem to work. And then classes began. In the beginning it was odd for me, it sounded so mystical and I never thought I’ll get the hang of it. For some time I would miss my practices at home, and be sustained by the group session. But then some shifts began to emerge in my life, I became more peaceful and could accept others as they are. Then I could accep… END_OF_DOCUMENT_TOKEN_TO_BE_REPLACED

I was in search of an authentic institution for Meditation for some time and found exactly what I had been looking for when I joined the School of Philosophy.  I instantly felt that I am in the right place.  The Teachings and the Facilitators are excellent.  The result – positive changes in my life. I am inspired and attending Class is something that I look forward to week after week.  I’ve met the most dignified and refined people. A Teaching I use daily which I learnt from the Sc… END_OF_DOCUMENT_TOKEN_TO_BE_REPLACED

“I go to the Philosophy School because it has helped me think about things I had not given much thought to before. It has helped me to think in a different way and to find new perspective on life, to focus on working out what is important, and to rediscover some of the joy in life which was there all the time. And it is great to do this with a fun bunch of people who are also searching and thinking and wanting to understand. It can lead you to a new dimension in your faith. It gives you time t… END_OF_DOCUMENT_TOKEN_TO_BE_REPLACED

Over the past few years I have been part of the School of Philosophy and one of the great lessons has been looking at oneself rather than others. It says a lot about us when we judge another. I didn’t think I was judgemental person (maybe not outwardly or obviously) but as I learned what it is to truly love and accept other people I realised that there was plenty for me to work on. We are all living life through our own layers and conditioning. We cannot see other people’s layers so lets not be … END_OF_DOCUMENT_TOKEN_TO_BE_REPLACED

“I go to the Philosophy School because it has helped me think about things I had not given much thought to before. It has helped me to think in a different way and to find new perspective on life, to focus on working out what is important, and to rediscover some of the joy in life which was there all the time. And it is great to do this with a fun bunch of people who are also searching and thinking and wanting to understand. It can lead you to a new dimension in your faith. It gives you time t… END_OF_DOCUMENT_TOKEN_TO_BE_REPLACED

“Studying philosophy has kept life fresh and interesting. I am able to be objective and less limited by past conditioning. It has given me courage to feel deeply without being afraid of becoming lost. I have an inner steadiness and calm which endures through any storm. I have learnt the freedom of complete honesty and the value of good company. I am never alone.” “Studying Practical Philosophy has not only brought depth, understanding and meaning to my life, but showed me how to experie… END_OF_DOCUMENT_TOKEN_TO_BE_REPLACED