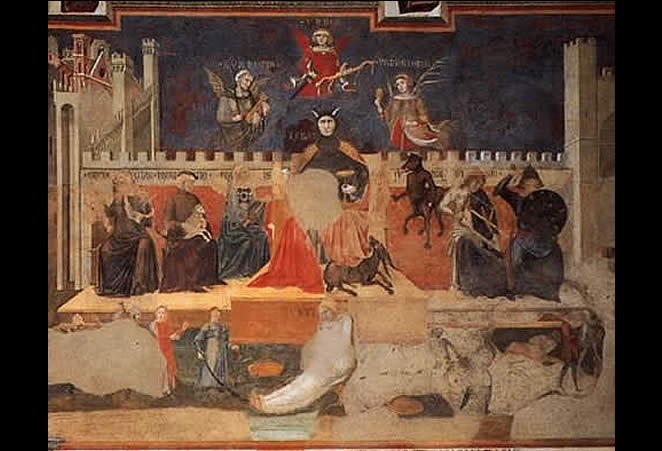 Ambrogio Lorenzetti painted in the city of Siena’s government building. This week we look at the effects of bad governance in the city and the country.

In the one copy below we can see how peace has been captured and the virtues rendered worthless and ineffective. Justice has been aborted and peace is defeated. In the city there are images of soldiers harassing women, buildings in states of disrepair and a generally wretched look. Those of us who live in 2022 in countries around the world will be very familiar with this imagery which is sadly prevalent in many cities.

In the country things don’t look much better, untilled, and burning fields, farmers fleeing the land and a general feeling of despair. Justice guided by wisdom no longer rules supreme and the concord that was patently evident where there was good governance was no where in sight and all the gatekeepers of good governance had been ousted. 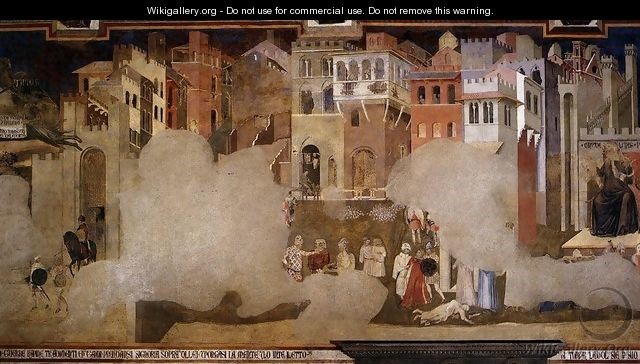 Unfortunately, currently, we often bemoan the state if governance and the state of rulers but there is no general agreement on firstly what causes this degeneration of society and more importantly how to fix the problem. There are lots of opinions on good and bad leadership and we sometimes see who we believed to be good upstanding citizens being voted into power only to be corrupted by the very thing they were appointed to resolve. This isn’t by any means a recent problem and has been evident for centuries.

It does seem that these days we don’t have much stomach to ring in the changes needed to provide the skills required for effective leadership. What we have witnessed over the past 5 decades is a clear degeneration from the moral structures that were in place pre the two great wars. What is most evident is that children often call the shots in households and the manners drummed into kids born in the early period of the last century have largely disappeared. 100 years ago, a man’s word was his bond, no need for legal documents and courts to force people to do what they committed to do.

I am not suggesting that good manners and respect for one’s elders would solve all our current problems, but I can attest those relationships are far more cordial where there is respect shown by both sides, where rules are adhered to and where honesty and integrity are upheld.

What we will begin looking at next week is how people can be educated in the art of leadership and how this can be imparted to the household, the town, the city and one’s country so that people are able to live in peace, practice their profession and to provide people with the skills to rule fairly and equitably. What the fresco’s clearly reveal is that where justice reigns supreme guided by wisdom, societies can function effectively and where bad governance prevails, chaos, violence and iniquity take over and the destruction of society is immanent.

The Allegory of Good and Bad Government Ambrogio Lorenzetti

“I go to the Philosophy School because it has helped me think about things I had not given much thought to before. It has helped me to think in a different way and to find new perspective on life, to focus on working out what is important, and to rediscover some of the joy in life which was there all the time. And it is great to do this with a fun bunch of people who are also searching and thinking and wanting to understand. It can lead you to a new dimension in your faith. It gives you time t… END_OF_DOCUMENT_TOKEN_TO_BE_REPLACED

“Studying philosophy has kept life fresh and interesting. I am able to be objective and less limited by past conditioning. It has given me courage to feel deeply without being afraid of becoming lost. I have an inner steadiness and calm which endures through any storm. I have learnt the freedom of complete honesty and the value of good company. I am never alone.” “Studying Practical Philosophy has not only brought depth, understanding and meaning to my life, but showed me how to experie… END_OF_DOCUMENT_TOKEN_TO_BE_REPLACED

Over the past few years I have been part of the School of Philosophy and one of the great lessons has been looking at oneself rather than others. It says a lot about us when we judge another. I didn’t think I was judgemental person (maybe not outwardly or obviously) but as I learned what it is to truly love and accept other people I realised that there was plenty for me to work on. We are all living life through our own layers and conditioning. We cannot see other people’s layers so lets not be … END_OF_DOCUMENT_TOKEN_TO_BE_REPLACED

I joined the school in October 2015. At the time I was a short-tempered young man and very bitter. My life was a mess, nothing I tried seem to work. And then classes began. In the beginning it was odd for me, it sounded so mystical and I never thought I’ll get the hang of it. For some time I would miss my practices at home, and be sustained by the group session. But then some shifts began to emerge in my life, I became more peaceful and could accept others as they are. Then I could accep… END_OF_DOCUMENT_TOKEN_TO_BE_REPLACED