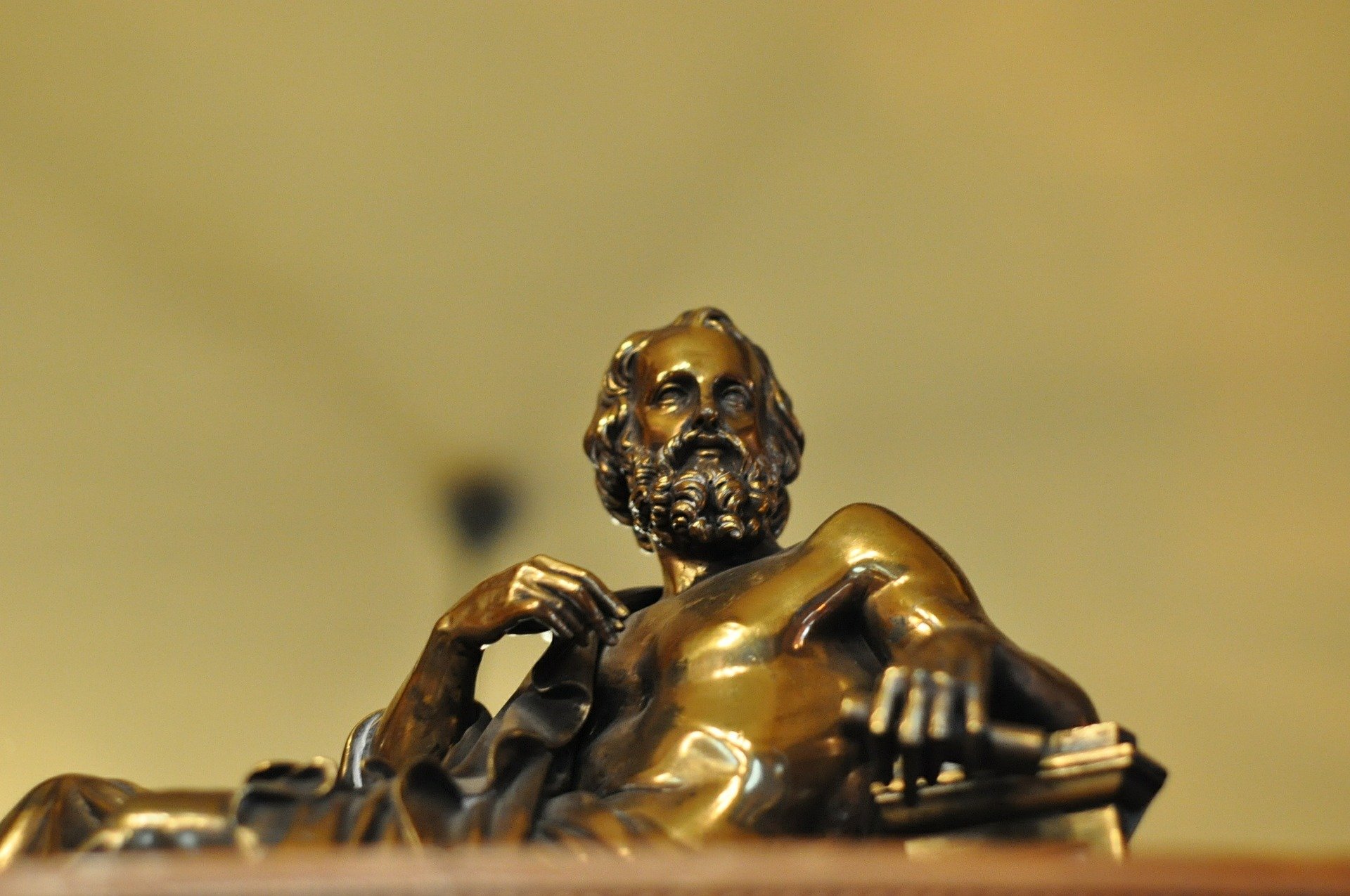 As mentioned in last week’s posting we will look at one of Plato’s dialogues on being and non-being.

In his trilogy the Sophist, (that succeeds Theatetus and is followed by the Statesman) Plato examines the value or otherwise of people of the day who called themselves Sophists. These were people who took on any argument for a fee and would argue on any subject whatsoever.

The main characters of the dialogue were Socrates, Theodorus who is an elderly and distinguished mathematician, a brilliant young mathematician called Theatetus and a character Plato calls the Stranger, who is a nameless visitor from Elea—home of the philosophers Parmenides and Zeno. He is the major speaker of the dialogue and represents the positions of the Eleatic school of philosophy, especially its belief that knowledge can only be of unchanging being and not of changing phenomena or things that are becoming.

Socrates had a well-known distrust of the Sophists and in this dialogue the Stranger seeks to discover, by means of a process he called dialectic, who they were and the merit or otherwise of their arguments.

These dialogues can appear difficult to follow and the main reason for this difficulty is that the Stranger in this instance, does not take anything as true until it has been fully probed using this process of dialectic (question and answer) and the intricacies of the mind are such that this form of dialogue can take a lot of time and requires fine attention and patience to penetrate. Unfortunately, fine attention and patience have been largely neglected in our modern society but with practice these qualities can be enlightened.

The world now faces many challenges chief among them is understanding the many points of view ventilated on mass media platforms. We can listen to thousands of opinions on our diet, health care and the state of our economy and it is difficult to discover what is true or real.

What is apparent is that man has upset natures balance and modern agricultural practices and the way we interact with each other has become distorted and it would be useful if we could find a way of living that honours these natural systems. This universal difficulty was highlighted whilst reading a small piece in our local newspaper on health. It was headed “Your immune system is one of the greatest assets you have”.

It went on to say that throughout your life your body will autonomously eradicate between 6 and 10 cancers without you even realising it. It will fight your infections, repair micro traumas and police the entire population of billions of cells in your body without asking and largely without our even knowing it. There is clearly a magnificent system at play that regulates the entire micro and macro cosmos about which we know very little. In his dialogues Plato indicates a way we can at least come to appreciate how this internal system works.

This is just by way of introduction and next week we will examine some extracts from the actual texts to give you an idea of the form these dialogues take. I’ll close off with an observation the Stranger made about the average person like you and me “and that they do not require to be refuted by others, but their enemy, as the saying is, inhabits the same house with them; they are always carrying about with them an adversary, like the wonderful ventriloquist, who out of their own bellies audibly contradicts them”. It thus becomes vital to recognise this duplicitous speech both without and within.

I was in search of an authentic institution for Meditation for some time and found exactly what I had been looking for when I joined the School of Philosophy.  I instantly felt that I am in the right place.  The Teachings and the Facilitators are excellent.  The result – positive changes in my life. I am inspired and attending Class is something that I look forward to week after week.  I’ve met the most dignified and refined people. A Teaching I use daily which I learnt from the Sc… END_OF_DOCUMENT_TOKEN_TO_BE_REPLACED

Over the past few years I have been part of the School of Philosophy and one of the great lessons has been looking at oneself rather than others. It says a lot about us when we judge another. I didn’t think I was judgemental person (maybe not outwardly or obviously) but as I learned what it is to truly love and accept other people I realised that there was plenty for me to work on. We are all living life through our own layers and conditioning. We cannot see other people’s layers so lets not be … END_OF_DOCUMENT_TOKEN_TO_BE_REPLACED

“I go to the Philosophy School because it has helped me think about things I had not given much thought to before. It has helped me to think in a different way and to find new perspective on life, to focus on working out what is important, and to rediscover some of the joy in life which was there all the time. And it is great to do this with a fun bunch of people who are also searching and thinking and wanting to understand. It can lead you to a new dimension in your faith. It gives you time t… END_OF_DOCUMENT_TOKEN_TO_BE_REPLACED

“Studying philosophy has kept life fresh and interesting. I am able to be objective and less limited by past conditioning. It has given me courage to feel deeply without being afraid of becoming lost. I have an inner steadiness and calm which endures through any storm. I have learnt the freedom of complete honesty and the value of good company. I am never alone.” “Studying Practical Philosophy has not only brought depth, understanding and meaning to my life, but showed me how to experie… END_OF_DOCUMENT_TOKEN_TO_BE_REPLACED

I joined the school in October 2015. At the time I was a short-tempered young man and very bitter. My life was a mess, nothing I tried seem to work. And then classes began. In the beginning it was odd for me, it sounded so mystical and I never thought I’ll get the hang of it. For some time I would miss my practices at home, and be sustained by the group session. But then some shifts began to emerge in my life, I became more peaceful and could accept others as they are. Then I could accep… END_OF_DOCUMENT_TOKEN_TO_BE_REPLACED