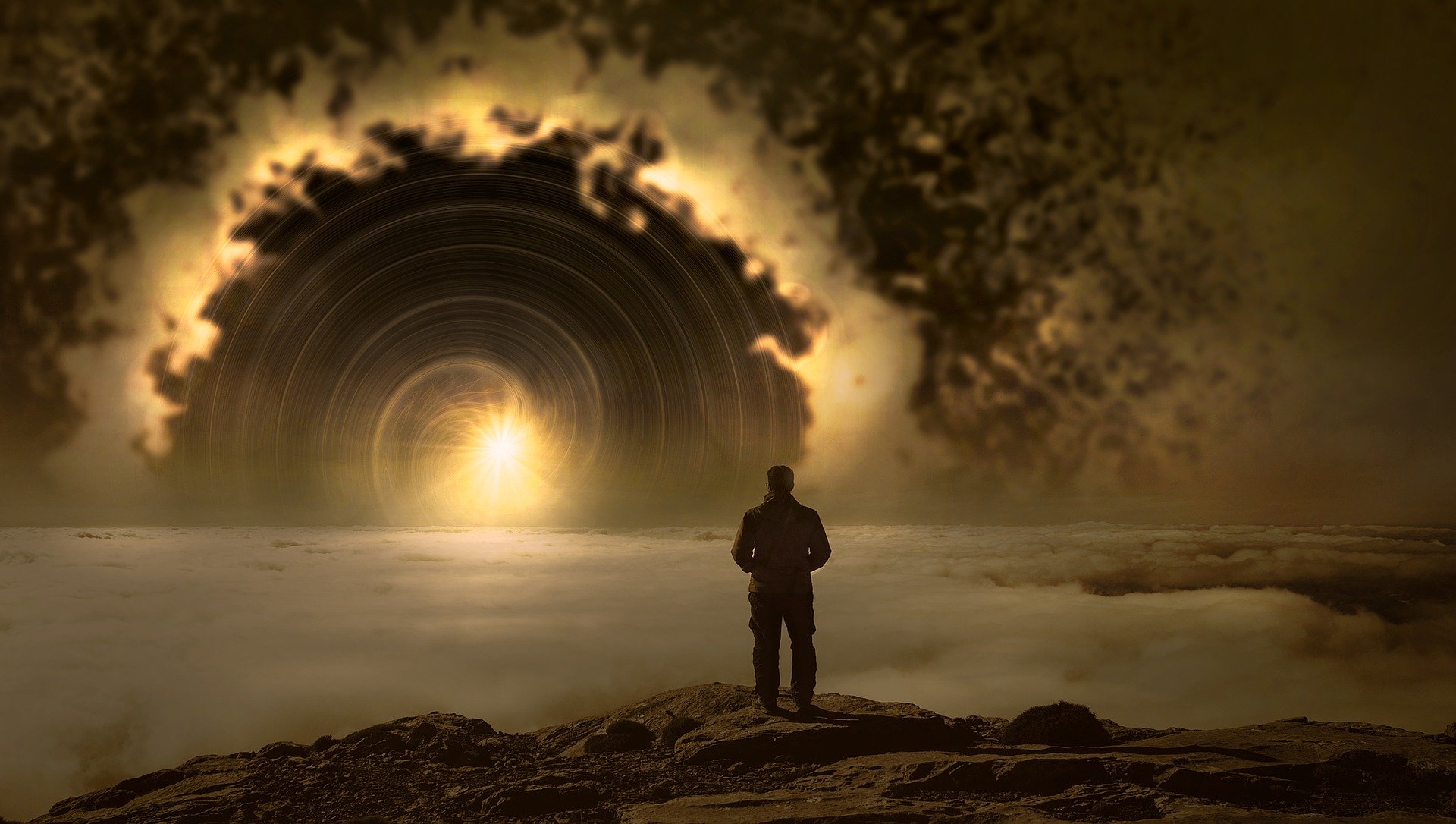 Last week we spoke about how the Sophist weaves his magic over his audience and how he beguiles people into believing what he says. The Stranger and Theaetethus agreed that the art used by the Sophist was his use of the imitative process and they, as before, decided to divide the imitative art into two, the one being likeness making and the other being making appearances.

This is quite a difficult topic to recognise because we ourselves practice this art with ourselves when we believe the opinions held in our minds and not the truth. For how a thing can appear and seem, and not be, or how can a man can say a thing which is not true? Indeed, the task is a difficult one. If we agree that falsehoods do exist then we get caught in a contradiction because something false cannot exist and by extension cannot Be. The two of them get into a debate on this subject that I must confess I found difficult to follow and even the Stranger at the end of the debate expresses his difficulty in making sense of this as the following debate illustrates:

And if we say to him that he professes an art of making appearances, he will grapple with us and retort our argument upon ourselves; and when we call him an image-maker he will say, ‘Pray what do you mean at all by an image?’ And I should like to know, Theaetetus, how we can possibly answer the younker’s question? When you tell him of something existing in a mirror, or in sculpture, and address him as though he had eyes, he will laugh at you to scorn, and will pretend that he knows nothing of mirrors and streams, or of sight at all; he will say that he is asking about an idea.

THEAETETUS: What can he mean?

STRANGER: The common notion pervading all these objects, which you speak of as many, and yet call by the single name of image, as though it were the unity under which they were all included. How will you maintain your ground against him?

THEAETETUS: How, Stranger, can I describe an image except as something fashioned in the likeness of the true?

STRANGER: And do you mean this something to be some other true thing, or what do you mean?

THEAETETUS: Certainly not another true thing, but only a resemblance.

STRANGER: And you mean by true that which really is?

STRANGER: And the not true is that which is the opposite of the true?

STRANGER: A resemblance, then, is not really real, if, as you say, not true?

THEAETETUS: Nay, but it is in a certain sense.

STRANGER: You mean to say, not in a true sense?

THEAETETUS: Yes; it is in reality only an image.

STRANGER: Then what we call an image is in reality, really unreal.

THEAETETUS: In what a strange complication of being and not-being we are involved!

STRANGER: Strange! I should think so. See how, by his reciprocation of opposites, the many-headed Sophist has compelled us, quite against our will, to admit the existence of not-being.

STRANGER: The difficulty is how to define his art without falling into a contradiction.

THEAETETUS: How do you mean? And where does the danger lie?

STRANGER: When we say that he deceives us with an illusion, and that his art is illusory, do we mean that our soul is led by his art to think falsely, or what do we mean? Again, false opinion is that form of opinion which thinks the opposite of the truth: You would assent?

STRANGER: You mean to say that false opinion thinks what is not?

STRANGER: Does false opinion think that things which are not are not, or that in a certain sense they are?

THEAETETUS: Things that are not must be imagined to exist in a certain sense, if any degree of falsehood is to be possible.

STRANGER: And does not false opinion also think that things which most certainly exist do not exist at all?

STRANGER: And here, again, is falsehood?

THEAETETUS: There is no other way in which a false proposition can arise.

STRANGER: There is not; but the Sophist will deny these statements. And indeed, how can any rational man assent to them, when the very expressions which we have just used were before acknowledged by us to be unutterable, unspeakable, indescribable, unthinkable? Do you see his point, Theaetetus?

THEAETETUS: Of course he will say that we are contradicting ourselves when we hazard the assertion, that falsehood exists in opinion and in words; for in maintaining this, we are compelled over and over again to assert being of not-being, which we admitted just now to be an utter impossibility.

I am sure you all agree that it’s very difficult to summarise these dialogues because they show us how we ourselves should question what we believe and don’t believe, but rarely do. I also need to remind you that Socrates stated that man does not wilfully commit an injustice. You might baulk at this statement as it forms the bedrock of our criminal justice system but if we look at it in the light of the preceding argument, then we might come to the conclusion that the reason mankind strays from the truth is not that they wilfully wish to be unjust, but that they are beguiled by ignorance that causes us to see the good as bad and visa-versa.

Here then is a question for you. If you really KNEW that tobacco was bad for you, would you still smoke? Similarly, if we really knew the results of killing another human being, would we still commit the murder? Or if you really knew the power of your speech, would you still utter hateful words to another? Clearly not. The problem is that our understanding and knowledge are incomplete and vague, and waxes and wanes and this makes it easy for sophists to get people to do and accept all sorts of things and will convince them that what they do is right. Consider how leaders of cults get what appear to be smart people to do dumb things. The big difficulty it seems is not a lack of knowledge per se but a kind of ignorance that prevents us from seeing things as they really are.

In closing it was interesting listening to a talk by a modern popular spiritual leader where he too maintained that the real evil in our current society is ignorance. But more of this next week.

My source in the main are the translations of Plato’s Dialogues by  Jowett and replicated on various websites. The one I used for this dialogue and have also used The Internet Classics Archive | Sophist by Plato (mit.edu)

I joined the school in October 2015. At the time I was a short-tempered young man and very bitter. My life was a mess, nothing I tried seem to work. And then classes began. In the beginning it was odd for me, it sounded so mystical and I never thought I’ll get the hang of it. For some time I would miss my practices at home, and be sustained by the group session. But then some shifts began to emerge in my life, I became more peaceful and could accept others as they are. Then I could accep… END_OF_DOCUMENT_TOKEN_TO_BE_REPLACED

I was in search of an authentic institution for Meditation for some time and found exactly what I had been looking for when I joined the School of Philosophy.  I instantly felt that I am in the right place.  The Teachings and the Facilitators are excellent.  The result – positive changes in my life. I am inspired and attending Class is something that I look forward to week after week.  I’ve met the most dignified and refined people. A Teaching I use daily which I learnt from the Sc… END_OF_DOCUMENT_TOKEN_TO_BE_REPLACED

“I go to the Philosophy School because it has helped me think about things I had not given much thought to before. It has helped me to think in a different way and to find new perspective on life, to focus on working out what is important, and to rediscover some of the joy in life which was there all the time. And it is great to do this with a fun bunch of people who are also searching and thinking and wanting to understand. It can lead you to a new dimension in your faith. It gives you time t… END_OF_DOCUMENT_TOKEN_TO_BE_REPLACED

Over the past few years I have been part of the School of Philosophy and one of the great lessons has been looking at oneself rather than others. It says a lot about us when we judge another. I didn’t think I was judgemental person (maybe not outwardly or obviously) but as I learned what it is to truly love and accept other people I realised that there was plenty for me to work on. We are all living life through our own layers and conditioning. We cannot see other people’s layers so lets not be … END_OF_DOCUMENT_TOKEN_TO_BE_REPLACED

“I go to the Philosophy School because it has helped me think about things I had not given much thought to before. It has helped me to think in a different way and to find new perspective on life, to focus on working out what is important, and to rediscover some of the joy in life which was there all the time. And it is great to do this with a fun bunch of people who are also searching and thinking and wanting to understand. It can lead you to a new dimension in your faith. It gives you time t… END_OF_DOCUMENT_TOKEN_TO_BE_REPLACED

“Studying philosophy has kept life fresh and interesting. I am able to be objective and less limited by past conditioning. It has given me courage to feel deeply without being afraid of becoming lost. I have an inner steadiness and calm which endures through any storm. I have learnt the freedom of complete honesty and the value of good company. I am never alone.” “Studying Practical Philosophy has not only brought depth, understanding and meaning to my life, but showed me how to experie… END_OF_DOCUMENT_TOKEN_TO_BE_REPLACED